All right, folks, welcome to the results of the first-ever joint live-blog between the Feminist Librarian (aka my girlfriend, Anna) and me, and our friend Minerva. :)

The subject? Not the season ender of Doctor Who Season 5 or Torchwood: Children of Earth although these were considered. Instead, we voted -- with the support of our friends -- for the first episode of the BBC production Downton Abbey. 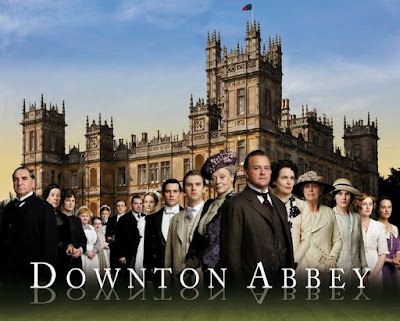 And, no, this isn't technically a live-blog. It's more the result of us sitting here with a laptop between us and typing whilst (like my vocab use there?) we watch. And then you get to read it! Fun all 'round.

So lets get going...(time stamps off my laptop rather than PBS...)

8.57: Waiting for the off. Mark Walberg from The Antiques Roadshow a continual disappointment since he is not Mark Wahlberg.

8.58: And now the "Give up for car to earn PBS money" ad. Anna and Minerva make tea for refreshment.

9.01: There's a Masterpiece Trust now? Interesting. Uh...thanks, rich guys, for paying for this, I guess!

9.02: Who gave Laura Linney this job? But her delivery's improved. "A voyage to America won't solve anything." Oooooohh.... but Morse code will?

9.03: And the rounds of everyone who is in this...good god...Oh, I need someone to call Joanne Froggatt! Oh, a telegram! Horror! Interesting historical commentary there... I know that house...

9.04: Minerva makes a justified comment on the fuzziness of the camera. Very bad decision. M: "With the shaky cam again!" H: Must admit, it seems more natural with James Bond than Maid Jane.

9.05: The rolling POV...A: I wonder what the average size of a household staff for a house was? M: About 50 people? H: Pissed butler is pissed!

9.06: M: Someone's sleeping with one of those maids! A: Possibly all of them? Simultaneously?

9.07: M: And a remarkably see-through outfit. A: So which one of the men is sleeping with Lady Mary?

9.09: And so we bring up the Titanic -- odd starting point. Interesting point. H: And the fucking harpies enter...whoa...flanked by weird daughters...

9.10: We wait with bated breath for the telegram. Which...isn't all that helpful. James and Patrick! Augh! Who are they!

9.18: [first appearance of Dame Smith as Dowager Lady] Fangirl expressions of love for Maggie Smith all 'round... A: For someone who I'm led to believe is sweetness and light, she plays bitch.... M: Maybe it's cathartic?

9.21: [Daisy mooning over sulky footman] M: Daisy is going to end up in the family way... A: And not quite understand how it happened. H: Does she only have one dress? M: Yeah. She's so going to end up pregnant.

9.24: "Blessed and merciful God, thank you!" [maid freaking out about chicken for no identifiable reason] M: What the fuck!

9.25: [housekeeper and butler confer] Brief side disquisition on straining of port to remove sediment. H: Always interesting to note in these dramas how "downstairs" adopt the "upstairs" as family, faux or otherwise.

9.27: [Lord and Other Daughter share 'moment'] "If being all right is compatible with feeling terribly terribly sad." M: Awkward, awkward hug.

9.29: [sulky footman and Yorkshire maid] M: What's goin' on with those two? H: Both smoking. Interesting.

9.30: [maid commenting "not very lame" about Bates] A: What's up with sour older sister? M: Sour older sister's probably tired of being used as a pawn! A: But not ready to chuck it all and give it over.

9.31: So what is with footman/maid alliance against Bates? Who seems quite nice? M: Jesus... H: That was about the least subtle subterfuge I've ever seen in my life...

9.33: [Bates and Lord] A: What's the history there? H: Peter and Bunter. [moment of silence] M: You know it's sad when you get the offhand British allusion.

9.50: [Middle sister Edith: "What were you and Mary doing in the attics?"] H: And middle sister sticks her foot in it. Hehe.

9.52: [Anna taking food to Bates] M: I hear you, honey; I"m a sucker for that shit. H: And what's he going to do? Hang around until he can be cannon fodder in 1914 as a disabled but useful officer? Yay for the treatment of veterans!

9.54: [re looking up Anna/Joanne Froggatt on IMBD] H: Oh, hell, I just remembered -- she's from that awful second episode of MI-5 -- she's the one who got deep-fried....yuck. Anna, God, we're idiots! She is fucking Sam Tyler's mother! I mean, not literally...she is Sam Tyler's mother!

9.57: [Duke: "You might tell that footman I've gone up."] H: Well, you're not the game there, honey! M: God, how did women survive this time? H: Vibrators. A: I don't know if vibrators would solve their financial problems...

9.58: [Thomas kneels in front of Duke] Moment of stunned silence. A: This is like slash that gives you the 'no feeling.' M: ...this is still a little hot. This is like Upstairs, Downstairs with a gay twist! H: They're...quite sweet? M: Oh -- not sweet. H: Nope, not sweet. [as threats pass between footman, Duke] M: Oh, wait -- I feel some angry sex coming on...maybe not...maybe...awwww...no slashiness. A: Well, he was being a bit of a bastard. H: Yeah...Maurice without the nice ending. M: Wow... [as footman tries to master his emotions.] H: Yeah...kind of touching.

10.02: [as Lord and Lady retire] H: Oh, they sleep together. A: Yeah...wonder if they changed it for modern audiences?

10.05: [as Bates returns] H: Oh, good on the old Lordship... M: What's going on there? A: They might just be doing a Peter/Bunter... M: It's interesting because of his thing about "I have to do what my conscience feels is right" and then what about that [Bates]?

10.10: [as servants critique Matthew] H: She would be the only one with a Yorkshire accent...

10.12: M: Are you guys noticing the fuzzy edges of every single shot? It's making me feel like I've got cataracts!

10.12: [as Mrs. Crawley/Dowager Lady Grantham clash -- general laughter] H: And the butler thinks that was the funniest thing he's seen all week. M: I think all the servants really enjoyed that!

10.15: [Lord and Matthew going at it] H: Nothing like a good generational shift to help settle your dinner.

10.22: And Mark Walberg is back to disappoint us again. M: That was a really odd ending point. I don't know what to do with half of the women in this show. A: And when they're trained to pick a husband based on their economic prospects...to some extent she's been raised since birth to make those kind of judgments of future prospects. She doesn't have any sense of marrying someone because she likes them as a person. M: She has a little bit of an inkling of that -- "I refuse to mourn for a man I do not love..."

And I can only type so fast, folks, so for more, either bug Anna, Minerva, or me for more, or tune in next week!

I will definitely try to be here next week. That was very amusing, and echoed some of my thoughts.

@Elleoneiram: Glad to have you along -- happy to hear we amused someone other than ourselves! As typist, I apologise for some of the vagaries of formatting in the first edition; I think I've worked out how to do it more intelligently next time. :) It's been a few years since I've had to transcribe a real-time conversation!