Anyway, how could I miss out on Arbogast Day (as started by the good folks at Kindertrauma and condoned by the equally good folk at Arbogast on Film) and the opportunity to talk about the eternal question of all fandoms: who would you save?

And so at some point last year I wrote a pretty uninspired post for this meme about Newt from ALIENS. And that's fine and I still adore Newt and I would still save her given the opportunity.

But over the past few months I've been delving deeper into my adoration for '50s sci-fi and I've rewatched Them! a frighteningly large number of times and you know what? It's Police Sergeant Ben Peterson's turn. 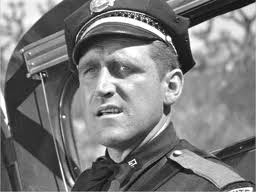 Them! is one of your seminal "effects of radiation making things huge and nasty" films. Released in 1954, its villains are giant irradiated ants who have become bored in their desert home and are wandering further and further abroad in search of food -- food that, increasingly, comes in human shape.

You don't actually see the ants for quite some time: the opening of the film is pure atmosphere as two New Mexico policemen, Peterson (James Whitmore) and his sidekick, Blackburn (Chris Drake), investigate a string of strange events, starting with the destruction of a family trailer and the disappearance of the family. The trailer is torn apart and, weirdly, sugar is strewn on the floor. 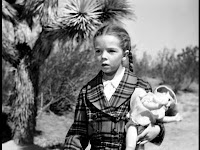 Peterson is the first to find a survivor of the ants: a little girl (Sandy Descher) wandering in the desert. He picks her up, carries her carefully back to the police car, and is sure to look after until the medics take her away. When a strange sound echoes across the desert, neither Peterson, nor anyone else, notice that the girl reacts -- but silently.

As the weather begins worsen -- turning into a sandstorm -- Peterson and Blackburn turn to the local gas station -- only to find it, too, destroyed. The owner's nowhere to be found; his shotgun is torn in half. Sugar is, again, on the floor. Peterson goes for help; Blackburn will not be there when he gets back.

The opening of Them! is really slow in comparison to things like Space Children (which comes to mind because the Descher is in both films) or The Monster That Challenged The World or even something like The Beast from 20,000 Fathoms or It Came from Beneath the Sea! -- Them!'s opening gives the audience time to settle in, feel comfortable, and then get disturbed -- and then feel comfortable -- and then get disturbed all over again. Perfect horror timing, really. Plus the filming is beautiful: lovely clean black-and-white with no camera tricks to distract from the essential fascination of the landscape itself -- and whatever is lurking in it.

But the point of this post is Sergeant Peterson. As I said before, he's the first to find a survivor and his care of the little girl and his evident sympathy for her situation and the deaths of her family make him stand out. The other policemen are interested in the crime -- not the little girl who survived it. Watch his face as he fits together the broken pieces of her doll and realises this poor kid is on her own. Peterson is interested in the people -- something that he evidences throughout the movie and eventually gets him killed.

As the story progresses and the eventual call is made for "expert scientific assistance," Dr. Harold Medford (Ed Gwynn) and Dr. Pat Medford (Joan Weldon) arrive. By now we also have Robert Graham (James Arness) as our local scientific expert overwhelmed by what's happening around him. Graham and P. Medford are clearly going to be our couple for the film and, since no-one tries to exclude Peterson, he tags along, learning as best he can and contributing as best he can. By now, the Army in full regalia is involved and Peterson is outgunned and (could have been) outclassed. But he's quiet, assertive, and calm -- in a room full of dramatic duelling egos, he's a valuable team member. He has a solid sense of humor -- as in his interactions with H. Medford during a helicopter search for the ants-nest. He knows these people are probably smarter than he is -- but there are also things that he does well -- like diving into said ants-nest with a flamethrower -- which he can do that they can't. He's willing for there to be give-and-take and to be a team-member without being a glory-hunter.

Some ants make an escape from the doomed New Mexico nest -- one queen is caught with her new brood on board ship. As the ship goes down, so do the ants: problem solved. But others are uncaught as yet -- until Peterson and the team start getting funny news stories out of Los Angeles. (The storm drains must have been a powerful pull for film crews even then!)

The team goes down to investigate and finds that a local man and his two sons have disappeared -- while flying a toy plane near a drainmouth. And an inmate in the hospital drunk ward across the way has seen strange things moving in and out of the drains -- huge ants, he says. But who's going to believe a homeless drunk? Peterson and Graham will, since they know he's right. Peterson and Graham have both honed their listening skills by this point in the story!

And here's where you start to feel that the storywriters either didn't know what to do with Peterson or thought they could give him a blaze of glory ending that the character really doesn't quite warrant. Graham and P. Medford are, as I said, clearly going to be the couple; H. Medford is the aging scientist who gets the glory of the new discovery in his old age; the Army dudes are....well, the Army dudes. They get to shoot things. What does Peterson get? 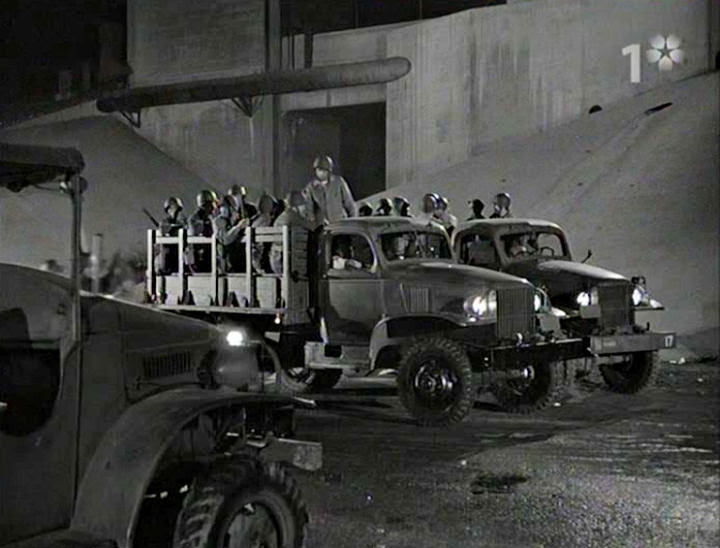 As far as we've seen in the story -- there's nothing he wants. There's no girl for him to get; no guy for him to get, certainly! He's happy with his job (we assume.) We don't see a home or a family or get any sense that there's someone worried about whether or not he comes back. He seems to leave New Mexico readily enough when the story moves away from its original setting. While the other characters either have roots that come with them -- the Medfords -- or are busily occupied in the creation of new roots -- Medford/Graham -- Peterson has neither and thus has no future at the end of this movie.

It becomes evident that the storm sewers need to be searched for the missing man and his kids. Peterson volunteers to go in as one of the on-foot searchers and, of course, tracks down the kids in the middle of a huge ants-nest: ants everywhere. As he struggles to get the kids up into a passage where they can climb down to the waiting soldiers, an ant comes up behind him and catches him. The boy safely climbs up into the passage but can do nothing to help Peterson. Despite the best efforts of Graham and the soldiers as they rush into the passage a few seconds too late, Peterson dies.

In the end, a few minutes later, the soldiers pour fire down onto the two queen ants in the nest and destroy them as H. Medford intones the semi-famous closing line of the film: "When Man entered the atomic age, he opened a door into a new world. What will he eventually find in that new world, nobody can predict."

Peterson's death is pointless. It would have been just as easy to have Graham and the soldiers rescue him as not. As it is, it seems like his only point is to save the kids and then die -- as quickly as possible, please, we have a denouement to get to! I think he deserves better. Certainly better than a not-all-that-quick death by ant in an LA storm sewer. He's been a solid team player all along; a valuable member of the Anti-Ant Group; a helpful soother of distressed children; and an intelligent asker of questions. Couldn't we have done better for him than this?

In a way, Peterson is too nice for his own good: he hasn't eyed women (Graham) or been crotchety (H. Medford) or given orders to up the firepower (military). He's been almost self-effacingly quiet -- in a lot of scenes, it's possible to not notice he's there until he asks a question -- and reasonably pleasant. He's established early on as a rescuer and a salvager, a noticer of small things -- by his death, it would seem that the story is arguing these things aren't important or, worse, these things are dangerous. This seems unfortunate. A world left to the Medfords, the Grahams, and the military would be very full of shouting. Perhaps there would be no giant ants, but there would be no-one noticing lost children either.

Perhaps the Doctor and Sergeant Peterson would have gotten along well; neither of them felt able to pass by a distressed child.

You wrote all that today?! Color me impressed! I love Ben and I think Whitmore's work is really great in Them!. While it's true that Ben is usually shunted to the back of the frame, watch the way that Whitmore pulls focus from the actors in the foreground by doing something in the background - picking up a piece of paper, scratching himself - it's always some little bit of business to keep himself vital in the scene. That performance has just quadrupled its value to me over the past 20 years.

@Arbogast: The earlier post was in draft form already: I just made it prettier and tossed it up. :) I only really wrote the bit about ...Madness this morning.

I first watched Them! when I had access to a really great college library film collection in 1999 or so and I really wasn't thrilled; can't remember why. I was completely amazed when I stumbled across it on Netflix insty last summer, put it on expecting to hate it all over again -- and was totally riveted by it.

And I absolutely agree about Whitmore keeping himself on the radar, so to speak. He's a great listener, too -- very active, always physically attentive to what's going on. He's invested in what's going on without, like, turning cartwheels to make the point that he's tuned in.

Rewatching the movie now over lunch, post-blogging, I wish I had remembered that he was the one to pick up the little girl after her shrieking incident with the formic acid. All the others in the scene are excited, discussing what just happened and what that means -- and he's the one to take direct action on what's happening right now in front of them. Interesting.

Thanks for stopping by!

Ben Peterson has a really interesting relationship to the children in the film. He finds the little girl, he's the one she runs to when she smells formic acid, and he's the guy who helps the kids in the storm drain at the end, at the cost of his own life. A very interesting character who thwarts expectations in a way that never pulls focus but just enhances the narrative.

@Arbogast: Perhaps someone was thinking of the "all policemen are your friend" idea?