okay, so no-one can cry foul later: this post is about the end of time, the last of the david tennant specials closing out his final season as the doctor. there are spoilers. don't read if you haven't seen -- no, really, i mean it. i will ruin it for you and i don't want to. on the one hand, i'm not going to do a blow-by-blow synopsis of the episode for a number of reasons including -- well, i just don't want to; i'd probably do it badly; and i don't want to watch the show again in order to be able to do it well. on the other hand, i'm never quite sure what details people consider show-killer spoilers and what are just details. so better safe than sorry, yes? just bookmark the post and come back later.

first off, i should say that i went through two tissues watching the second part of end of time. really, to understand the uniqueness of this, you have to know me -- but suffice it to say that i have people in multiple states and time zones who will vouch for the fact that i never cry at movies. movies, songs, tv shows -- i just don't tear up. i don't know why; it honestly doesn't reflect a lack of feeling or emotional involvement -- it has been suggested by a co-worker that i am an alien robot and the best i can do is to say that i don't think that's true. (but if i were an alien robot, isn't that what i'd be programmed to think?) russell t. davies should be able to put in his resume that he has brought me to tears four (count 'em: 4) times: torchwood, "reset" and "exit wounds;" doctor who, "journey's end" and "end of time." 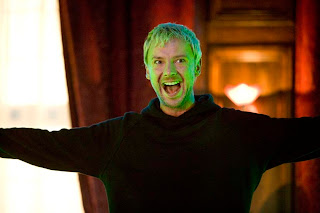 in case you've been a doctor who fan under a rock, "end of time" is a two-parter -- probably because davies enjoys torturing us. there's a fair amount of overacting: tennant and john simm, playing the master, just about split the honors between them, but it's only really distracting overacting in the first half of the first part. after that, simm, at least, calms down a bit and gets down to some serious character development. the master, i have to say, comes off as seriously awesome in this. damaged -- oh, my god, yes. damaged beyond belief. but there is some long over-due character development work and his relationship to the doctor and (big picture time) to the other time lords who...cast him out? exiled him? sent him to prison? gave him a going-away party? waved goodbye with chocolates? we don't really know -- is finally explored. i'd've loved to have seen more, but there were some great moments between simm and tennant as they tried to find some kind of middle ground where they could both, quite literally, continue to exist.

if you remember the last time we saw the master -- the whole issue with the valiant and the doctor being turned into something about the size of your average parrot and lots and lots of jack-torture -- he was complaining about a rhythm in his head, drums in his head -- well, there is an explanation for this and i love it: after all this time, the time lords want to come back and they are just the tiniest bit pissed off. so their method of self-rescue is to plant a signal in the master's head, literally driving him insane over centuries of accumulated time, until he figures out a plan to get the signal out of his head and figure out what it does. which is to haul the time lords out of their chronological dead end and back into real time. 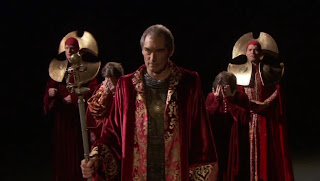 the idea that the time lords, after all this, are villains, controlling, manipulative survivalists who would do anything to get themselves out of the dead-end time vortex they were trapped in after the doctor "ended" the time war is fan-fucking-tastic in my book. if you're a long-time fan, you know that portrayals of the time lords have wavered wildly from being benign, uninvolved observers (although never as "uninvolved" as they liked to claim), to actively interfering busybodies. (and this is just the time lords as a group, too, without taking into particular account the individual time lords we meet like the rani or the meddling monk, as well as the master. or, for that matter, susan or jenny.)

i love this solution. the idea that they would plant a signal in the master's mind, using him, forcing him to do what they want in order to open up a route for them to return and exact revenge on the entire fucking universe so that they can ascend and become gods is just fucking fantastic. i love pretty much everything about it. the time lords and gallifrey are no longer a deus ex machina that can save the world at any time; instead, they are now the biggest fucking danger to traffic that was ever created. yes. i like it. i like the master's reaction to his discovery that he has been used. i like david tennant's reaction to it. i like pretty much every little damn thing about it.

in all of this, too, there's a tempting, tantalizing, teasing suggestion as to the origin of the "blink" angels. as rassilon (rassilon, for god's sake! rassilon is a bad guy! oh my lord, that is cool!) and the other time lords materialize out of the vortex, rassilon makes some comment about the two women behind him (you can see them up there in the still) who have chosen to disagree with the senate's decision (a senate apparently entirely made up of prydonians which just explains so freakin' much) as having chosen to become "weeping angels." and, really, who would have more hunger or desire for quantum energy than a pissed-off time lord cut off from the congress of other time lords? but, while this is a great suggestion, i don't really want to know what the solution is and i'm really afraid, from the look of season 5, that steven moffat has the explanatory itch.

so there is a lot of great stuff going on here -- there are cameos from all the people you'd expect to see cameo, including martha, mickey (mickey the idiot has come so far!), jackie, rose, sarah jane, luke, and jack. bernard cribbins does a(nother) great turn as donna's grandfather, really providing the companion for the show and doing a fantastic job at it, too, keen to see the doctor again, eager to help, but also desperate to understand why the doctor abandoned donna and why the doctor, seemingly so lonely and at loose ends, won't just take donna back travelling with him.

i had hope -- such faith! -- that davies would use donna to some good end. she had to have been saved at the conclusion of season 4 to do something awesome, right? there was all that hoohah about her having "mindmelded" with the doctor and whatnot and now she was back on earth and could she remember or could she not and what could she do and what might she be able to do-- yeah.

davies pissed all that up a fucking rope and i hope he's sorry for it. 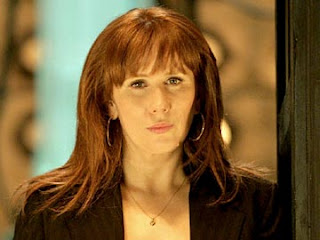 instead of doing anything at all interesting with donna, she is left by the end of the story to precisely the life she begged the doctor not to return her to at the end of "journey's end." she has come full circle and is back being the person she was when she started. it is horrible to watch and i hope davies regrets it. he threw away one of the best characters he has created to date, plus a great performer in catherine tate, and it shows. it is a weakness throughout the story and it is painful to watch in the end. all i could think of was "journey's end" and the doctor's cruelty there is compounded by what i can only describe as davies's willful refusal here to rescue the character. instead, she is left stranded in the version of her life she fought so desperately to escape.

yeah, i feel warm and fuzzy: how 'bout you?

i was also disappointed that jack had nothing more to do with the show than a minute cameo at the end -- it was great to bring back the russell tovey character from "voyage of the damned" and it'd be great to see the two of them again but -- since the bbc seems to have unofficially axed torchwood and i have little faith in any american version -- i'm really dubious about this.

there are some other great things in this two-parter: the ood reappear -- they have to be some of my favorite aliens from the new series. it's sweet and very sad that they show up in the last few minutes of the show to sing the doctor to his death, essentially. it was great to see a doctor confronting the dissolution of his personality; none of the previous ones have done that. giving the tenth incarnation time to reflect on his "mortality" and "death" is unique, as far as i know, and definitely an interesting new twist.

but, really, i'm going to be stuck for a long time on donna.

Posted by KarraCrow at 7:00 AM

Email ThisBlogThis!Share to TwitterShare to FacebookShare to Pinterest
Labels: doctor who