a quick review from...well, the last time this was on a saturday: in the spirit of "don't complain about something if you're not prepared to do it better," i noticed over the past couple of weeks two lists -- one from wired and one from a blog i know not of called ink-stained amazon which i have to say is beautiful to look at it -- that both purport to be 'essential lists' of 'geek culture' quotes.

okay, so the wired list starts off with monty python and the holy grail and the amazon list includes the sarah jane adventures -- but i'm still not wildly impressed with either one.
i figured i could do better.
then i thought about it and realised that, on my own, i didn't have the time to do better so i roped in my ever-patient girlfriend to help me do better. :)
first off, a couple of notes:
1. this is for fun. if you're not amused, go read something else. i won't be offended, promise. that being said, suggestions and additions (politely phrased!) are welcome in the comments. but keep in mind this is installation 1 of 4! not everything will fit in here.
2. these are probably mostly going to be dredged out of my memory, anna's memory, imdb, or official show/movie sites. inaccuracy is, therefore, almost inevitable. not to mention repetition of shows or characters. if this annoys you-- well, make your own list. :)
3. i'm not aiming for some kind of "worst to best" or "best to worst" list. they're here because the two people making the list think they're fun or because one of us was able to strong-arm the other into including them. brief context is provided where anna or i thought it was necessary.
5. i am aiming for 4 posts of 25 quotes each over the next 4 weeks. tune in each friday/saturday for your new installment! and here's the link to the first post, and the second, and the third.
okay, and that being said...
1. The Doctor: "Allons-y!" Pretty much any episode of the new series with David Tennant (we'll miss you, Mr. Tennant, sir.) 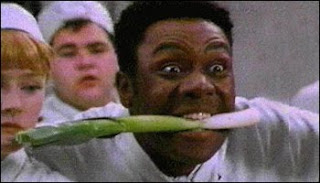 
4.  Leela [to someone attempting, foolishly, to grab her]: "Touch me again and I'll fillet you." Doctor Who, "The Sunmakers."


7. Spongebob: "I came over to see if you wanted to go jellyfishing, but I can see you're busy having an episode." Spongebob Squarepants, something in the first season...er. I can't admit to remembering the name of this episode but nothing from Chef! or Red Dwarf -- I just can't! 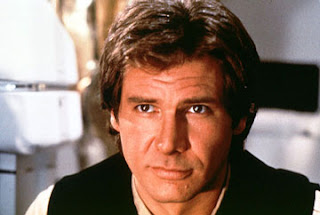 
9. Jared Grace: "I was reading in a footlocker!" The Spiderwick Chronicles.


10. Sarah Connor: "Do I look like the mother of the future? I can't even balance my checkbook!" Terminator.


12. Ianto Jones: "Because I know everything. Also, it's written on the bottom of the screen there." Torchwood and I am ashamed to say, but I have no idea which episode it's from. ... Second season? Maybe? Oh, help.


13. Son of Mine: "He never raised his voice. That was the worst thing - the fury of the Time Lord - and then we discovered why. Why this Doctor, who had fought with gods and demons, why he had run away from us and hidden. He was being kind." Doctor Who, "Family of Blood."


14. Sarah Jane Smith: "There are two types of people in the world. There's people who panic -- and then there's us. Got it?" The Sarah Jane Adventures, "Invasion of the Bane." 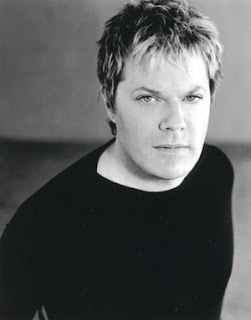 15. Eddie Izzard: "I have penis nonchalance, really." Live at Wembley.


17. Willy Wonka: "Everything in this room is edible. Even I'm edible. But that, children, is called cannibalism and is frowned upon in most societies." Charlie and the Chocolate Factory.


19. Willow Rosenberg: "The library. Y'know -- where the books live?" Buffy the Vampire Slayer, "Welcome to the Hellmouth."


20. Reverend H.W. Smith: "This is God's purpose, but not knowing the purpose is my portion of suffering." Doc Cochran: "If this is His will, He is a son of a bitch." Deadwood. Sometime around the end of the first season.


21. Carmen Ghia: "May I take your hats? And your swastikas?" The Producers.


23. Nina Conti: "That's a sweet voice on a monkey but with breasts it's bloody sinister."


24. Arthur Burns: "You shot me, Charlie. What're you gonna do now?" The Proposition. 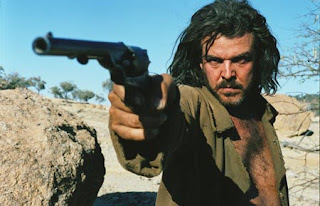 
They're all amazing movies. If you haven't seen them -- why the hell are you still sitting here reading this? You have watching to do!

Posted by KarraCrow at 1:49 PM