a quick review from last week saturday: in the spirit of "don't complain about something if you're not prepared to do it better," i noticed over the past couple of weeks two lists -- one from wired and one from a blog i know not of called ink-stained amazon which i have to say is beautiful to look at it -- that both purport to be 'essential lists' of 'geek culture' quotes.
ahem.
okay, so the wired list starts off with monty python and the holy grail and the amazon list includes the sarah jane adventures -- but i'm still not wildly impressed with either one.
i figured i could do better.
then i thought about it and realised that, on my own, i didn't have the time to do better so i roped in my ever-patient girlfriend to help me do better. :)
first off, a couple of notes:
1. this is for fun. if you're not amused, go read something else. i won't be offended, promise. that being said, suggestions and additions (politely phrased!) are welcome in the comments. but keep in mind this is installation 1 of 4! not everything will fit in here.
2. these are probably mostly going to be dredged out of my memory, anna's memory, imdb, or official show/movie sites. inaccuracy is, therefore, almost inevitable. not to mention repetition of shows or characters. if this annoys you-- well, make your own list. :)
3. i'm not aiming for some kind of "worst to best" or "best to worst" list. they're here because the two people making the list think they're fun or because one of us was able to strong-arm the other into including them. brief context is provided where anna or i thought it was necessary.
5. i am aiming for 4 posts of 25 quotes each over the next 4 weeks. tune in each friday/saturday for your new installment! and here's the link to the first post way back there last week saturday. or sunday. or something.
okay, and that being said...
1. Evelyn Carnahan: "I -- am a librarian!" The Mummy.
2. Stormtrooper: "Look, sir -- droids!" Star Wars: A New Hope. [and a freebie 'cause i always think of it now when i have to find the sw movies by number -- Eddie Izzard [re the Lucasian number scheme]: "He's fucking with us numerically, you realise that, right? 'Kids, count to 10!' '4 5 6, 1 2 3, -- uh --'" Circle.] 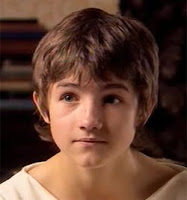 3. Luke Smith: "I think I may have made a social blunder. I showed them how to destroy the world." The Sarah Jane Adventures, "Revenge of the Slitheen."
4. The Doctor: "Because I'm very clever." , "Midnight."
5. Dutch [to the Predator]: "You are one ugly mother-fu---" Predator.
6. Ellen Ripley: "This is Ripley, last survivor of the Nostromo, signing off." ALIEN. 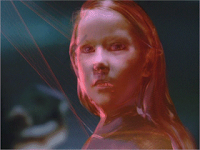 7. Red Queen: "You're all going to die down here." Resident Evil.
8. Mercedes [to Captain Vidal about his infant son]: "No. He won't even know your name." Pan's Labyrinth.
9. Captain Jack Sparrow [to Kraken]: "'Ello, beastie." Pirates of the Caribbean: Dead Man's Chest.
10. Eddie Izzard [re: the British Empire]: "We ruled the world through the cunning use of flags." Dress to Kill.
11. John McClane: "Yippee-kay-yay, motherfucker." DieHard. 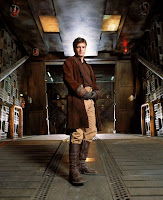 12. Malcolm Reynolds: "Were there monkeys, Kaylee? Space monkeys?" Firefly, sorry, forgot which episode. second or third, i feel...?
13. Chancellor Palpatine: "The Sith had many powers, some considered to be unnatural." Star Wars: Revenge of the Sith.
14. Neo: "Whoa." The Matrix.
15. The Doctor [immediately prior to regenerating]: "The end has come -- but the moment has been prepared for." Doctor Who, "Logopolis." 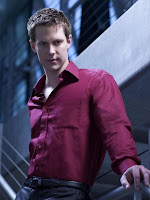 16. Jozef Kastan: "You seriously drink this stuff? What is it -- like, non-fat, vegan, soy blood?" Moonlight, no idea which episode.
17. River Tam: "I can kill you with my brain." Firefly, no idea which episode. whoops.
18. James Bond [when asked how he would like his drink prepared]: "Do I look like I give a damn?" Casino Royale.
19. Alice [to the White Queen computer about the Red Queen]: "I knew your sister. She was a homicidal bitch." Resident Evil: Extinction.
20. Capa: "When a stellar bomb is triggered, very little will happen at first -- and then a spark will pop into existence and it will hang for an instant, hovering in space, and then it will split into two, and those will split again, and again, and again... detonation beyond all imagining - the big bang on a small scale. - a new star born out of a dying one... I think it will be beautiful. No, I'm not scared." Sunshine.

21. Captain John Hart: "Did I mention I'm armed?" Torchwood, "Kiss Kiss, Bang Bang."
22. The Doctor [on Rose pointing out that he sounds North of England]: "Lots of planets have a north!" Doctor Who, "Rose."
23. Riddick: "Anybody not ready for this?" Pitch Black.
24. Rygel: "I am Rygel the XVIth, dominar of over six billion people -- I don't have to talk to you!" Farscape, no idea which episode. something in the first season, i feel.
25. Buffy Summers: "You forgot about dawn. It's in about six hours, idiot." Buffy the Vampire Slayer, "Welcome to the Hellmouth." 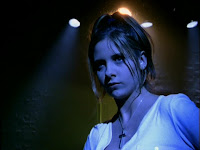 Posted by KarraCrow at 9:00 AM